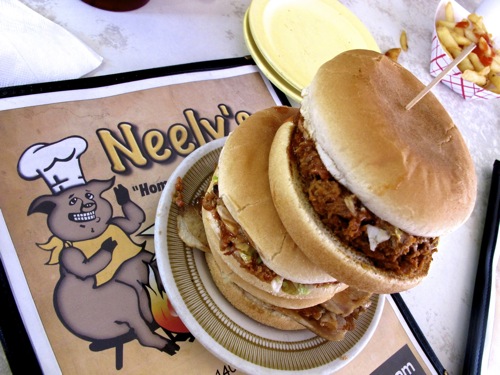 The “Brown Beef” (top), “Brown Pig” (center) and “Little Pig Ham” (bottom) are the three most popular sandwiches at Neely’s Sandwich Shop on East Grand Avenue in Marshall, Texas. The first is made with chopped barbecued brisket and sells for $2.85, the last is made with sliced barbecued ham and sells for $3.25. But the $2.85 chopped barbecued pork sandwich outsells both of the other two by a wide margin–it’s become so iconic that most people mistakenly call the restaurant “Neely’s Brown Pig.”

The restaurant’s barbecue pit is a steel cylinder type and burns hickory wood–the pork butts, briskets and hams are all wood-smoked. The “Brown Pig” is made by chopping the smoked pork butts in a Buffalo Chopper, and then seasoning the ground meat with barbecue sauce. It is served on a small hamburger bun, spread with a little mayo and dressed with shredded lettuce. Bill Moyer, a Marshall native and Neely’s fan called it “the best sandwich between here and China.”

When the restaurant was founded in 1927 as Neely and Sons, the chopped pork sandwiches sold for 15 cents each. The name was changed to Neely and Brothers when James Neely’s father died and he took over. Later it became Neely’s Sandwich shop. The current location was originally a drive-in. You can still order from a take-out window on the front of the place, the last vestige of the old method of operation.

Two Neely sisters still own the building, but the business was sold to an employee, Sally Cobb, a few years ago. Sally still works as a waitress at the restaurant she owns, darting from table to table taking orders and delivering Brown Pigs. 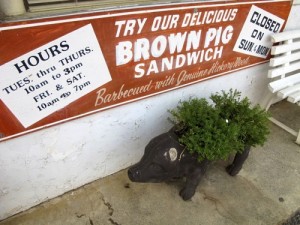 It’s interesting that chopped pork is more popular than chopped beef at Neely’s. James Neely’s barbecued pork sandwich was patterened after the chopped pork sandwiches at the seminal drive-in chain called the Pig Stand. When you order a Brown Pig, you hold in your hand a link to the 1920s, when the drive-in was born and Southern-style barbecued pork was a lot more common in Texas.

One thought on “Texas BBQ Pork: The Brown Pig”