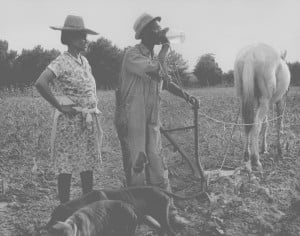 It was spring in 1965 near the Pea River in Alabama. My father was driving along when he noticed a woman toting a fruit jar of well water to her husband who was plowing a mule in a nearby cornfield. As my dad pulled up to the corn rows, he began a smooth rap revealing his kind and honest persona that no doubt allowed him a brief but sincere entry into the lives of his newly found photographic subjects. The woman was at first hesitant about her husband and herself being portrayed in their work clothes in the field with the mule and plow. My father assured her that it would be a picture that would not be made fun of, and they agreed to be photographed.

Aside from his awareness of the beautiful light falling on their faces, and the translucency of the drinking water, and the gestures that reveal their strength, and his composition and careful cropping of the animals so they would remain a secondary notion within the frame, it is the unobtrusive, noninvasive presence of this white, blond, blue-eyed stranger that remains so remarkable. He had become a part of that picture: a self-portrait, so to speak, reflecting his own background. It revealed where he is from and what he is. He knew those people, and those animals, and the trees and the sky. A true kinship emerged.

My father’s photographic experience on that one afternoon created a path that I have chosen to follow.

(From the Introduction to Weeping Mary, University of Texas Press)