Looks like I’ll helping out with the barbecue duties at the St. John’s Bonfire Festival at Burren College of Art. 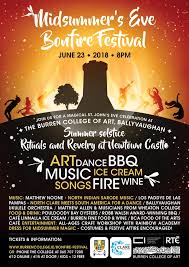 June 23, Midsummer Night, the shortest night of the year, is celebrated all over Europe. In the pre-Christian era, Midsummer Eve was an Ancient Greek festival called Adonia. It was the first festive day (and night) when Adonis was allowed to depart the underworld to spend six months with his paramour, Aphrodite. It was considered a time to celebrate the first bliss of new and reunited lovers. Shakespeare’s Midsummer Night’s Dream used the festival’s romantic theme to drive the plot of one of the bard’s most popular plays.

In the UK and Ireland the event is celebrated as St. John’s Eve, an ancient fire festival also known as Bonfire Night. Once a wide-spread tradition, the bonfires are now most common in the farming country of the rural West of Ireland. On this night, Irish farmers prayed to St. John for fruitful growing season.

BBQ is a new addition to the festivities, but it can’t be the first time pe0ple cooked over a live fire outdoors during a bonfire party.

Here’s a description of what went on in the Old Days:

“…old people of thirty years ago and more remembered how the fire used to be lit exactly at sunset and had to be watched and tended until long after midnight. Prayers use to be said to obtain God’s blessing on the crops, then at the peak-point of summer bloom.

Round the fire gathered young and old. There was much fun and music; a dance was started and games were played while some young men competed in casting weights or in feats of strength, speed or agility. I gathered that it was mostly women who shared in the prayers for the gardens and for good weather. Neglect in this respect might lead to a bad harvest or cause “the white trout not to come up the river” as they usually did with the mid-summer floods.

Unless the weather proved too cold, summer swimming in the river began on St. John’s Day and the observance of the festival was supposed to eliminate all danger of drowning.

…in my early youth near Knockaderry, County Limerick, I remember a curious custom repeated each St. John’s Eve. The young people used to gather from the marshy ground near the river Deel the large leaf and strong stem the hocusfian as it was called and each youth armed with one of these went around lightly striking each person that he or she met. This was supposed to protect those who were struck from illness and evil influences during the coming year. Afterwards, the hocus stems were thrown into the fire. Here, too, people threw into the fire specimens of the most troublesome weeds in the district – this was supposed to protect the fields from these weeds.

Old people told me that it was customary to jump over the fire from side to side. Some wise elder claimed to be able to tell, from the manner of jumping and the flickering of the fire, whether the jumpers were guilty or not of certain misdemeanors, such as theft or misbehavior with women.

Some people used to take the ashes from the fire then extinct on St. John’s morning to scatter them on their fields. At the close of the festival too about after midnight any man who had built a new house or had nearly completed it took from the bonfire a shovel of red hot sods to his new home so that the very first fire there would be started by the ceremonial bonfire.

About the year 1905 a very old man told me that his grandfather had told him that in his young day – in the late 18th century – the young men used to walk through the fields with lighted torches and then cast these into the fire. This was supposed to bring a blessing on the fields and protect the crops from harm.

It was widely believed that a house built on a path frequented by the fairies and other such uncanny travellers would suffer from midnight noises or supernatural manifestations. Perhaps too, ill luck in the farm or personal illness might afflict the family. One remedy for these evils was to bring on St. John’s Eve portion of the blessed fire and to build with them on the path in several places small fires which would be left burning until morning.

It was also customary that small objects of piety, such as rosary beads, little statues or scapulars, when they became broken or worn out were destroyed without disrespect by being burned in the Midsummer Fire.”

While this very-much abbreviated description of St. John’s Eve still captures this writer’s imagination, it overlooks the fact that there used to be two very distinctive fire traditions. The first was the one the old school master mentions – the large communal bonfire assembled and lit by the residents of an entire townland or village – and sometimes the whole parish! But, the equally as important tradition that he doesn’t mention is the one where small fires were lit by individual households. In contrast to the revelries of the community event, these were quiet occasions where the main concern was in observing the protective rituals. About the only merry-making one might have witnessed was younger children playing around the fire.

But, enough of the peace and quiet. Back to the fun and frolic of a community festival!

For several days beforehand, children and young people went from house to house asking for donations for the blessed fire. It was considered very unlucky to refuse. In fact, at some fires, the names of generous donors were called out and the crowd would cheer. But then, the names of the miserly were also announced and these were greeted with jeers and catcalls.

Imagine what it must have been like. Around the fire were assembled all the people of the locality – from the smallest children to the oldest men and women. As the sun set, the fire was lit. Usually, this honor was given to a knowledgeable elderly man who would say the traditional prayer for the occasion. One verse of this prayer is:

In the honor of God and St. John, to the fruitfulness and profit of our planting and our work, in the name of the Father and of the Son and of the Holy Spirit. Amen. 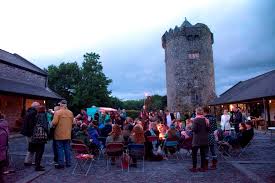