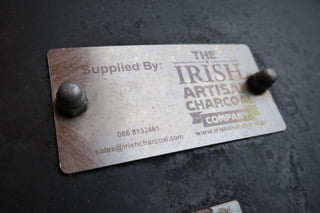 A year ago, while eating a pulled pork sandwich at the Eatyard in Dublin, I noticed the name “Irish Artisan Charcoal” on a steel plate attached to a barrel smoker.

Since I moved to Western Ireland in January, I have sorely missed my Texas offset smoker. And I eagerly await the day when I can ship it over. Meanwhile, I bought a Weber on Amazon.

Looking for fuel for my new Weber, I realized that instant light charcoal is about all you can find in the barbecue section of Irish supermarkets. You might get lucky and find some regular briquettes, but no hardwood lump charcoal or wood chips like you see in Texas supermarkets. 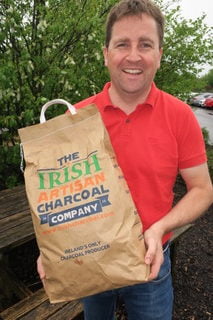 So I looked up the Irish Artisan Charcoal Company on the internet and sent an email asking where I could buy the stuff.

Founder Colin O’Loan called me in response. Most of the company’s charcoal is sold on the internet, he said.(It’s 12.50 Euros for a 3 kilo sack and can be delivered anywhere in Ireland.)

Londis Supermarket in Kilcolgan, which is close to his house, also sells it. That was quite convenient, since that store is close to my house too. It turned out Colin lives just up the road from me. He agreed to meet me for a coffee and I quizzed him about the charcoal business.

“It all started when some foodie friends and I started meeting up at a friend’s shed for barbecue and beer,” said the head of the sales department at Irish Artisan Charcoal. (The company has two part-time employees, counting Colin.)

Live fire cooking was trending in Europe at the time and Colin and his foodie friends were on the cutting edge. “We starting getting all nerdy about barbecue,” he explained. Finding exceptional meats and interesting barbecue sauces became borderline obsessive. “One guy was a beekeeper and he brought his own honey to drizzle on the ribs for a glaze,” said Colin.

“After a while, we started talking about the charcoal itself. Instant light charcoal is loaded with chemicals and it smells awful. We wanted fuel that enhanced the flavor of the meat.”

It turned out that no one in Ireland was making and selling charcoal. Colin studied the charcoal making process and began exploring the possibility of making his own charcoal. “I was introduced to a forestry manager from Limerick and we started talking about it. He was very interested.” You don’t need trees to make charcoal, you need branches about the size of your arm, Colin said. Those kind of trimmings are refuse in the forestry industry. And forest managers are always trying to figure out how to get rid of it.

With plenty of wood available, the guys from the shed pooled their funds and imported a kiln from England. It’s not as big as industrial charcoal-making kilns. “It’s like a two meter long tube—it holds 500 kilos of timber, which yields 120 kilos of charcoal,” Colin said. The men make their charcoal out in the country near Athalone. 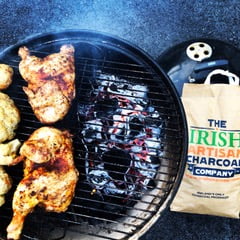 It’s an excellent product, I cook with it all the time. It is lump charcoal made from a blend of hardwoods and it burns hot–great for searing a steak directly over the coals. For Texas-style barbecue, I like to put a couple of split beech logs around the coals and cook roasts, chickens and the larger cuts on the far side of the grill with indirect heat–smoke from the beech logs adds flavor.

It’s the only charcoal you can buy that’s made in Ireland. But the men aren’t exactly making a killing in the yet. “So far, it’s an expensive hobby,” Colin said with a laugh.

UPDATE (Summer 2019): Due to a kiln explosion, Irish Artisan Charcoal is temporarily out of business. We hope for a speedy return!