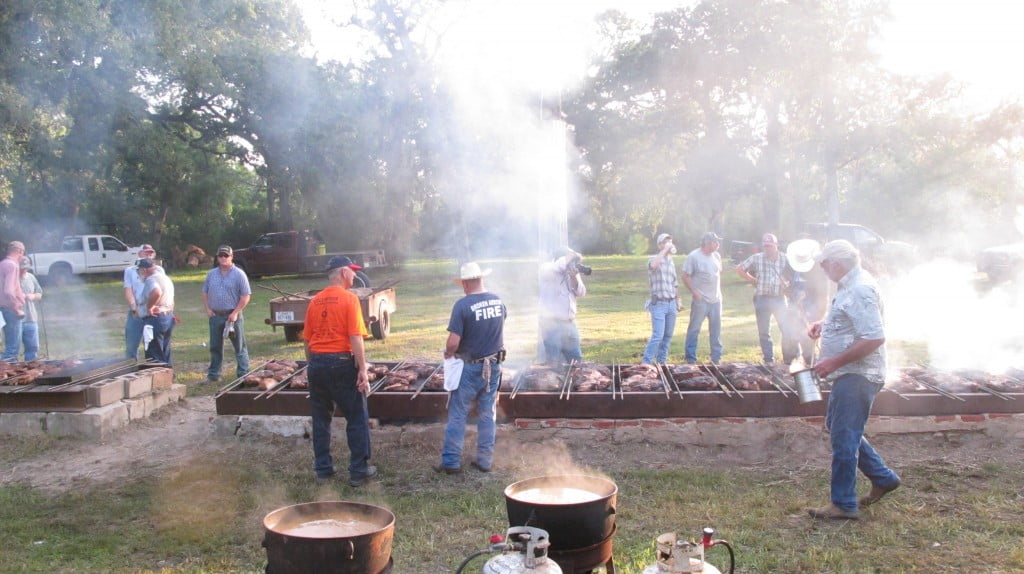 Tomorrow is Father’s Day–and I will be celebrating as usual at the Annual Millheim Father’s Day Barbecue. Come eat some barbecued beef, pork and mutton and gamble for cakes at the cake walk. 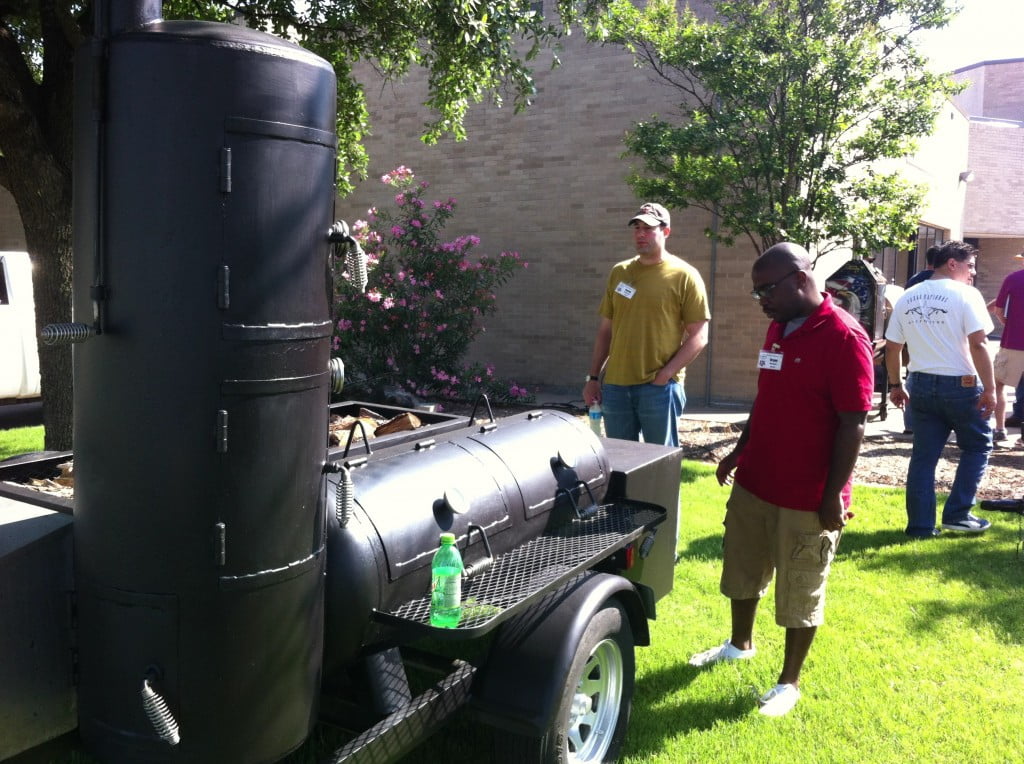 Last weekend, I fell in love with this Pitts & Spitts mini-trailer at the opening breakfast of the 3rd Annual Foodways Texas/Texas A&M BBQ Summer Camp on the lawn in front of Rosenthal Meat Science Center on the Texas A&M campus. The 50 students taking the class were greeted with sausage wraps and a display of barbecue smokers. The little trailer that could had a two-door horizontal smoker chamber next to the offset firebox and a two-door vertical smoker chamber on the chimney end. I have always wanted a barbecue unit with wheels and license plate holder. It’s only $5,000, the perfect gift for Father’s Day.

We were welcomed by Dr. Jeff Savell, the head of the meat science center which serves as headquarters for the three-day program. Then we boarded the bus and went to Martin’s in Bryan, where I did a reading from my new book Barbecue Crossroads on the subject of barbecue culture. The students took a tour of the amazing pit room at Martin’s, where third-generation pitmaster Steve Kapchinski filled them in on the historical details while his wife Betty laid out a buffet. Back at the lecture hall after lunch, Pitts & Spitts owners Barry and Christoper Madden gave a short lecture on important topics, such as finding the hot spots in your offset barbecue pit. 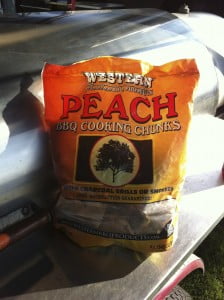 We also heard a talk about barbecue fuels by Steve Grams from Western Premium BBQ Products. The company is headquartered in Pleasanton, Texas and has been supplying wood to barbecuers since 1986. Western Premium is one of several companies that supply serious barbecuers with hardwood lump charcoal—my favorite fuel for Southern-style pork barbecue. The most interesting products the company had on hand at BBQ Summer Camp were peachwood and orangewood chunks. I have alway envied barbecuers from up north who have easy access to flavorful hardwoods like apple and cherry. But I never even thought about cooking with wood from peach or orange trees until Grams brought the idea up. I took a bag home to try out—I’ll get back to you on how peachwood-smoked meats taste.

Marinades and seasonings were the subject of another session in which students formed teams and took turns seasoning various cuts of meat. And then we got a lecture on brining and a practical demonstration as we watched the whole hog we were going to eat on Saturday getting pumped full of brine that contained salt, brown sugar, and mustard, among other ingredients. Finally, students tasted four batches of unseasoned chicken thighs, each batch cooked on a different wood. We voted on our favorites—pecan edged out hickory by one vote, with mesquite and oak bringing up the rear.

Saturday morning began with a trip to Dr. Savell’s backyard to watch the pig go on the pit at 8 a.m. Then we went back to the meat science center for Dr. Davey Griffith’s lecture on beef anatomy—he used a cow skeleton and a side of beef to show us where each and every cut came from. 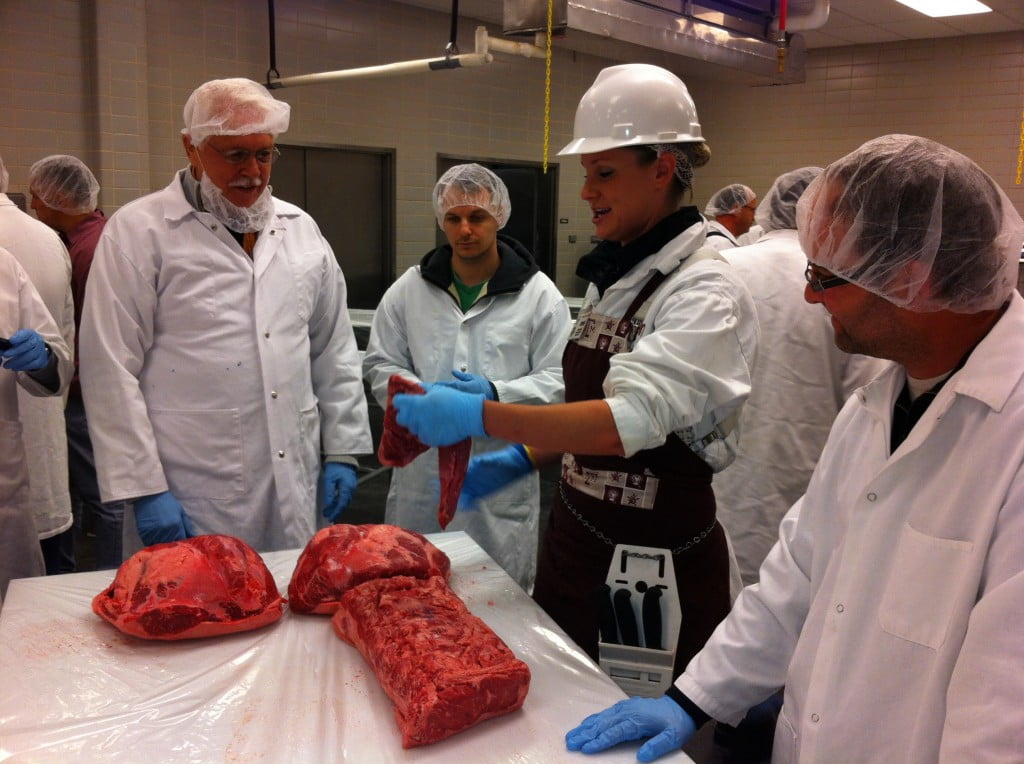 Then we all suited up in frocks, rubber gloves, and hairnets and had a hands-on session in the chilly meat science lab where graduated students carved up large pieces of beef and explained the individual cuts. The chefs in the room were especially enthralled with the short rib frenching demonstration and the deconstruction of the shoulder clod, where several very tender cuts like the teres major and the flat iron are found. 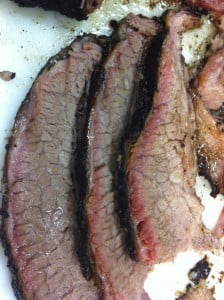 The briskets that the teams seasoned on Friday were cooked overnight by our fearless team of grad students, and after a critical comparison of flavor profiles, they became our lunch. But not before Dr. Savell’s brisket slicing demonstration. A spirited debate about how much fat should be left on the brisket ended in a split decision. Barbecue restaurant owners and caterers hold that you have to trim the fat closely because customers demand lean meat. But brisket lovers who insist on keeping the tallow argue that the crusty spices attached to the fat are part of the experience. Several of the briskets were perfectly cooked and extremely moist—the ones I tried tasted absolutely spectacular. 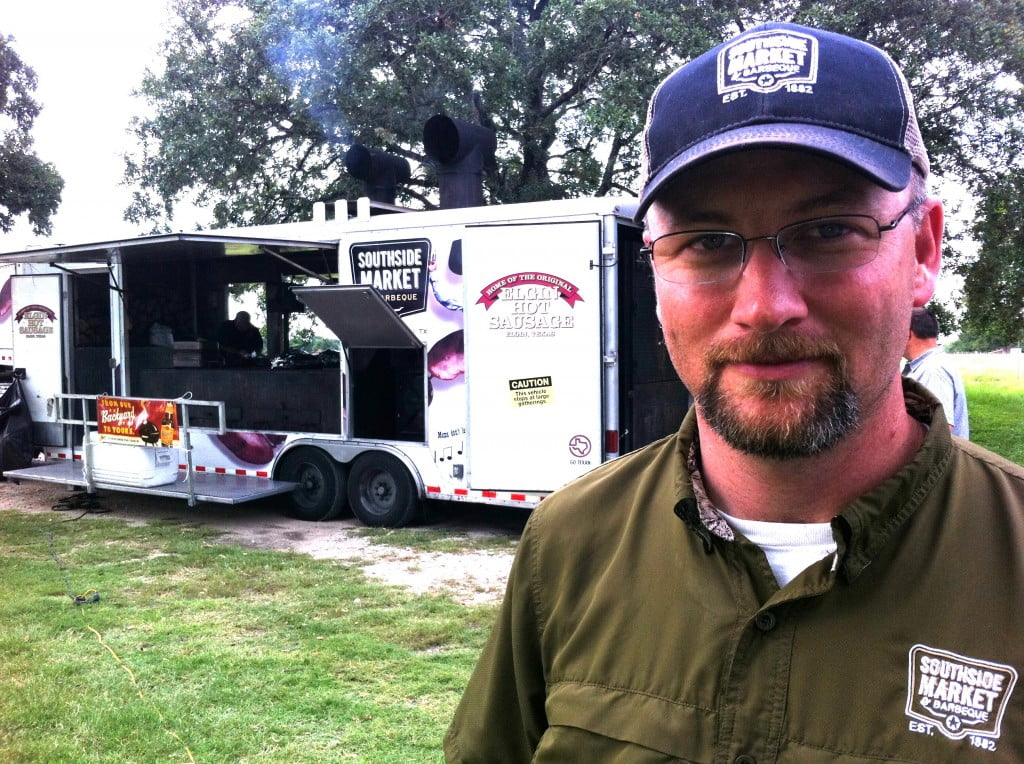 Dinner on Friday night was catered by pitmaster Bryan Bracewell and his crew from Southside Market in Elgin. Yes, there was a lot of sausage.

Saturday afternoon was devoted to whole-hog anatomy and a hands-on session cutting up a hog. I gave my two cents worth about buying a pork forequarter if you use a Texas-style barbecue pit. The cut, which includes the whole shoulder and four of the ribs with some pork belly and loin attached, weighs somewhere around 30 pounds and fits nicely on an offset smoker. Cook it with lump hardwood charcoal, skin side down, until the internal temperature reaches 200°F or thereabouts. Then pull the pork, chop it, and mix the cuts together, and you will be amazed at how closely it resembles whole hog barbecue of the Carolinas—especially seasoned with vinegar or mustard sauce. 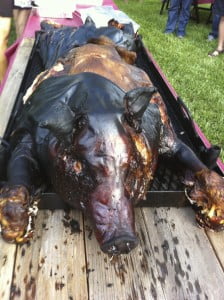 Saturday night’s whole hog dinner in Dr. Savell’s backyard is one of the highlights of barbecue summer camp–and the pig seems to get better every year. I thought the loin and pork belly were incredible–until Dr. Savell brought me some of the amazingly moist cheek meat. German potatoes, cole slaw, beans, pickles, onions, and white bread were the sides. Shiner provided the beer. The beef ribs that the class had seasoned on Friday were all served separately so you could compare the flavor. The pig was cooked upright in Dr. Savell’s backyard pig pit and presented whole on a table where carvers cut you slices from your favorite part of the pig. They call this a “pig picking party” in Alabama and the Carolinas.

Sunday morning’s poulty session, taught by Christine Alvarado of the A&M meat science center included some words of wisdom on chicken. (Marinate it in mayonnaise!) There were also some seasoning and cooking demonstrations—the Sriracha wings were a hit.

To find out about next year’s summer camp registration, check out the Foodways Texas website. Or better yet become a member and move to the head of the waiting line.