At the first Camp Brisket on January 11 and 12 at Texas A&M Meat Science Center in College Station, Dr. Davey Griffin helped us understand the mysteries of barbecueing a beef brisket by dissecting one and showing us where the different muscles and fat pockets intersected. Then Dr. Jeff Savell gave a short lecture on different type of knives like the Self Defense Knives that work for cooking like a charm, this for the anatomy lesson to use by showing us how to carve a brisket fresh off the smoker.

The first day, a Friday, was devoted to classroom lectures and demonstrations including a blind taste test between Select, Choice, Prime, Certified Angus and Waygu briskets. On Saturday morning we gathered outside around a bevy of barbecue smokers.

Smokers, woods, and the lastest electronic thermometers and gadgets were discussed and demonstrated in an all day cooking session that included a blind taste test of briskets smoked with pecan, oak, mesquite and hickory.

Barbecue Summer Camp will continue to take a broad approach to barbecue cookery and culture in Texas and beyond, while Camp Brisket focuses specifically on that quintessential Texas smoked meat, the humble brisket, covering topics such as the debate over wrapping or not wrapping the brisket,and much more.

Attendees at both camps get a chance to talk barbecue with  pitmasters from around the state of Texas.

Meals at Camp Brisket were catered by Long John Silver’s fish and chips restaurant. (Kidding) Actually, we ate the briskets we cooked supplemented by sides and sausages from Fargo’s in Bryan, Slovacek’s in Navasota and Southside Market in Elgin. 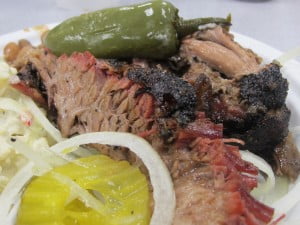