Many thanks to Brette Sember for her recent review of Legends of Texas Barbecue on the Lonely Planet’s Traveler’s Library blog.

The book starts with a detailed history of how Texas barbecue began (10,000 years ago with the Caddo Indians) and evolved as different peoples came to the area. The sport of barbecue (and it is without question a sport in Texas, verified you see the photos of the trophies that are competed for!) has been influenced by African-Americans, German-Americans, Mexican-Americans, and virtually every large ethnic group that has made an imprint on the state of Texas. Barbecue is a huge cultural institution in the Lone Star State and it seems no celebration is complete without some meat being cooked over a fire. Texans have made a tradition of this, and stories of the “free barbecue for all” festivals at inaugurations and other festivities are simply mind-boggling. 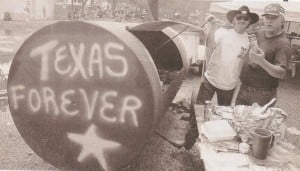 For those who think a gas grill is how you barbecue, the book goes into great detail about the variety of equipment used to produce authentic Texas barbecue. I had never heard of a water smoker nor knew the secrets of the charcoal starter chimney. The personal stories of famous barbecuing Texans will introduce you to the men (and very few women) who live and breathe barbecue in competitions, restaurants, and backyards.

These are the folks who live and breathe barbecue and they share their advice and tips. The photos in the book are pretty fantastic. Cowboy boots? Check. Cowboy hats? Check. Huge, giant pits, and massive barbecue festivals? Yep. Big hair. Most definitely. Crusty, dusty cowboys? For sure. This book shows you that the Texas of legends is very much alive and well and just waiting for you to visit and taste it. The photos of the meat are a visual treat. Rich, succulent, deeply glazed, and cooking amid giant clouds of smoke on dry landscapes, the barbecue in this book really does look like the stuff of fantasies. 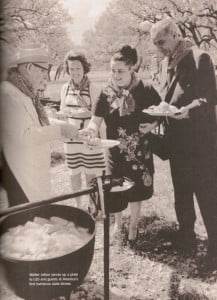 Some of the recipes will make you do a double take. One barbecue champion swears that marinating chicken in bottled salad dressing is the key to his success. Many recipes use no sauce whatsoever (which is surprising if you aren’t familiar with the vast geographic divide in barbecue across the country). And if you’re looking for the presidential touch, Ladybird Johnson and Barbara Bush’s recipes for barbecue sauce are included. Country style ribs marinated in orange juice, beer can chicken, pork shoulder, sirloin, barbecued goat, turkey, lamb, barbecued bologna (which apparently tastes like hot dogs), and brisket recipes will get you salivating, but don’t forget the sides! Barbecued cabbage, fried green tomatoes, turnip greens, mashed potato salad (and other potato salad variation), cole slaw, and of course, beans, all sound like they would be perfect next to a nice slab of smoky meat on your plate. You could eat for an entire summer just with this cookbook as your guide.

The final chapter is one you will want to rip out and put in your glove compartment if you’re going to be in Texas. It lists exactly where to go to get authentic Texas barbecue, with details on what to order and what to skip at each joint. Once you’ve seen the photos in this book and dog-eared a few recipes you’ll be imagining yourself at the barebones wooden table of a real Texas barbecue joint with a Coca-Cola sign overhead, digging into some Texas-raised and Texas-smoked beef while a guy in jeans, boots, and cowboy hat gnaws on a bone behind you.

To read about another great Texas cookbook by Walsh focusing on the Mexican influence, check out, The Tex-Mex Grill and Backyard Barbacoa Cookbook.

Combine the vinegar and oil in a mixing bowl. Rinse the ribs and pat them dry. Season both sides of the ribs with the dry rub.

Set up your smoker for direct heat. When the coals are gray, spread them out and place the ribs on a grill at least 18 inches above the coals. Cook for 20 minutes, mop with the oil and vinegar mixture, and then flip the ribs over and cook the other side. Light more coals in a chimney starter and replenish the fire after 1 hour. Continue flipping and mopping for roughly 2 hours, or until tender. Serve with barbecue sauce if desired.
Serves 2 to 4.

Place the potatoes in a 3-quart saucepan or Dutch oven and pour in cold water to cover. Bring to a boil. Reduce the heat to low and simmer for 10 minutes, or until the potatoes are tender. Drain.