There’s a recipe for Franklin’s brisket in my new book, Texas Eats. There’s also recipes for some other “shade tree barbecue” recipes. And then there’s a real gem of a BBQ recipe tucked away in the hamburger chapter.

It’s my version of the BBQ burger at Guy’s Meat Market in Houston. This burger is incredibly popular–people line up for them–just like Franklin’s brisket. The great thing about BBQ burgers is that they are snap to make at home. And they are a great idea for a quick dinner when you are getting ready to put a brisket or a pork shoulder on the pit overnight. 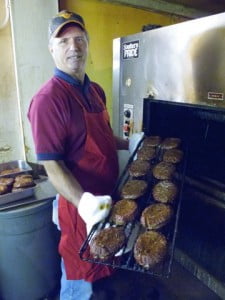 Tuesdays through Fridays, Guy’s Meat Market on Old Spanish Trail in Houston smokes 200 burger patties in their barbecue pit. They go on sale at 11 am and they often sell out before noon. The secret to enjoying Guy’s barbecued burger is to skip the lettuce and tomato and top it instead with barbecue sauce and pickles.
It’s not worth firing up the barbecue smoker to make a few hamburgers, but these are easy to make when you are smoking something else. Try them for dinner when you are barbecueing a brisket. The hamburgers are done in less than an hour and then you can let the brisket smoke overnight. 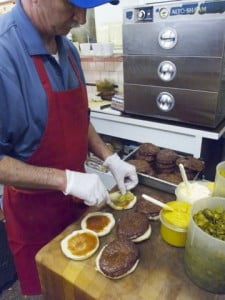 Start a charcoal fire in your barbecue unit. Use wood chips, chunks or logs and keep up a good level of smoke. Maintain a temperature between 275 and 300 degrees F. Sear the meat patties on a skillet set over the fire, turning once. Resist the temptation to press down on the patty with the spatula—this squeezes out all the juices and results in a dry hamburger.

Note: The USDA recommends that ground meat should be cooked well done (160° F) for safety’s sake. 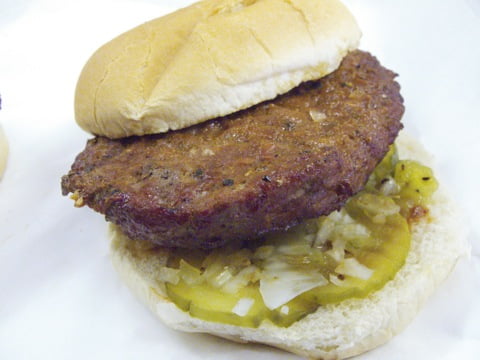 One thought on “BBQ Burgers”