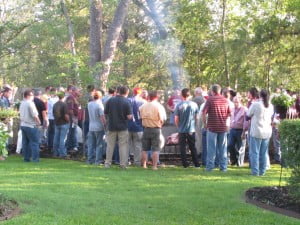 Saturday night’s dinner this year at Foodways Texas (FTX) BBQ Summer Camp was a traditional pig pickin’. A pig pickin’ party features a barbecued whole hog displayed on a table with all the condiments, side dishes and sandwich makin’s arranged nearby. Instead of the pitmaster pulling, chopping and seasoning the cooked pork, the guests grab some meat right off the hog. This year’s FTX BBQ Summer Camp pig was roasted upright in cinder block pit in Meat Science Center director, Dr. Jeff Savell’s back yard.

Foodways Texas Barbecue Summer Camp is a three day barbecue seminar hosted by the Texas A&M Meat Science Center, a division of the department of Animal Sciences, located on the Campus of Texas A&M in College Station. In a world class meat science facility, the nation’s top experts explain where all the various cuts come from and how the animal’s anatomy shapes the meat we barbecue.

This year’s lesson started with beef (this is Texas, after all). With the aid of a cattle skeleton nicknamed Bossy and a whole side of beef dangling from the ceiling, the names of the cuts and the intricacies of the USDA grading system were discussed. After the beef anatomy lesson, students suited up in butcher’s gear and went into the meat lab to help graduate students fabricate some cuts. 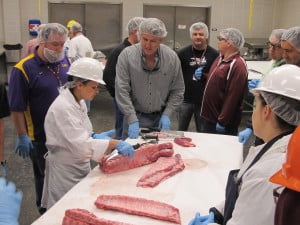 After the beef session, the seminar moved on to pork. The anatomy of the pig was explained with the help of a whole hog hanging in the classroom and again the class moved into the meat lab to learn how to fabricate pork cuts. Fascinating meat discussions ensued. Have you noticed that your baby back ribs include a lot more of the meaty pork loin than they used to? That’s because pork loin is selling for less than half the price of baby back ribs these days, thanks to barbecue fans. So the pork packers are leaving a lot more meat on the baby backs when the separate them from the pork loin roasts. 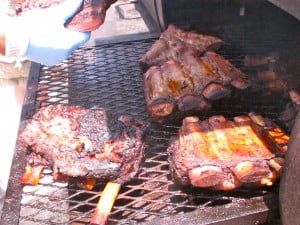 Sessions on brining, marinating, spice mixing and sauce-making ensured tasty lunches. A cutting edge class on wood smoke included chemical analysis of smoke and a taste test in which small pieces of unseasoned chicken were cooked with a variety of hardwoods. On Friday, students concocted seasoning blends. They rubbed these on Boston butts, briskets, and beef and pork ribs and numbered the samples for identification. The meats were cooked by a team of graduate students and served for lunch on Saturday. There were no winners and losers–but some lunches tasted better than others!