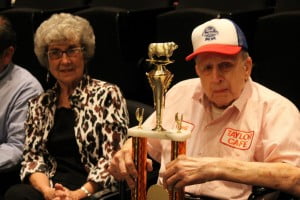 In World War II, Vencil served as corpsman during the invasion of Normandy. When he got home, he took a job at Southside Market in Elgin. Southside meat market was famous for Elgin hot guts, a beef and pork sausage with lots of cayenne in it. Southside Market was a rough and tumble joint on the wrong side of the railroad tracks. Laborers ate there, but women and families didn’t go there. Today, Southside Market is a family restaurant out on the main highway. The sausage doesn’t have much cayenne in it anymore either. After making sausage at Southside Market for a while, Vencil decided to open his own place. So he bought a run-down hotel in an old building in Taylor.

Vencil Mares opened the Taylor Cafe in 1948. The building used to be two stories, but the top story burned down and was never repaired. Vencil put a barbecue pit in back and served beer in front. Just like the old Southside Market, Vencil’s Taylor Café was a rough joint that catered to working men.

The farmers around Taylor grew cotton. Up until the mid-1950s, cotton was still picked by hand in Texas. Hundreds of thousands of Mexican and African-American migrant farm workers followed the cotton harvest. They started down south in the Rio Grande Valley and working their way north as the cotton ripened and was ready to pick. Over 150 cotton picking crews worked the cotton fields around Taylor in the 1950s. The town fathers did everything they could to attract more cotton pickers–if they didn’t get enough pickers at the right time of the year, part of the cotton crop would rot in the field.

When the cotton pickers got off work, they got dropped off by the train tracks and walked into town, where they often outnumbered the residents. Vencil remembers swarms of cotton pickers standing shoulder to shoulder out on Main Street in front of the Taylor Café. The cotton pickers didn’t have a lot of options when it came to places to eat. There were very few restaurants that served cotton pickers. Mostly they bought food in groceries and convenience stores. They bought up all the ready-to-eat smoked meat from the meat markets.

The Taylor Café did a lot of business because it was open to anyone, black, white and Hispanic and that included cotton pickers. Vencil stacked cases of beer in the front of the café and sold them as fast as he could ice them down. The cotton pickers were a rough bunch. And there were a lot of fights. Vencil remembers the time two cotton pickers got in a knife fight and he had to take their knives away. It sounds dangerous. But for a guy who had just been through the invasion of Normandy, a knife fight between a couple of cotton pickers was no big deal, Vencil says.

There are two bars in the Taylor Café, a relic of the era of segreation. Blacks sat on one side, whites on the other. There are also two front doors, one for whites and one for blacks. Each side used to have its own juke box. Vencil just took the black juke box out a few years ago. When local black people visit the Taylor Café they still sit on the black side of the restaurant. Nobody tells anybody where to sit anymore, they just keep doing it that way. But there aren’t as many black customers as there used to be.

The heyday of Taylor Café came to end in the 1960s when cotton picking was mechanized. Tractor-sized mechanical cotton pickers took over the hard work of cotton picking in the fields of Texas and the numbers of migrant farm workers dwindled. Taylor changed over the years as its younger residents moved off to Austin and other big cities instead of taking up farming. But the Taylor Café never changed.

In 2011, Vencil celebrated his 87th birthday. The signs are still on the walls. Vencil is pretty proud of all those deer heads hanging on the walls too. He shot each and every one of those bucks down in South Texas where he used to go hunting. Vencil uses a walker now, but he gets around the old joint pretty well.

Vencil Mares is the dean of Texas pit masters. He was making sausage and smoking meat before most of his fellow barbecuemen were born. He still smokes the brisket and sausage himself on the same old-fashioned barbecue pit he’s been using for decades. He burns post oak and keeps the temperature in the barbecue pit under 300. The backyard of Taylor Café is a woodpile where the wood is seasoned.

Vencil wraps his briskets in butcher paper after 6 to 8 hours of smoking and holds them overnight n coolers. The cooler retains the heat so the briskets keep cooking slowly getting more and more tender. The next day Vencil reheats the brisket and slices the meat. Vencil’s barbecued brisket is excellent. His barbecued pork ribs are also outstanding.

Mares is an Austrian name, but most of Vencil Mares ancestors are Texas-Czech, and Texas Czechs are known for their sausage. Vencil is famous for his “bohunk sausage,” Bohemia is a Czech region. And Bohunk is slang for Bohemian. Along with brisket, sausage and ribs, Taylor Café offers sides such as potato salad and beans and homemade desserts like banana pudding.

The Taylor Café isn’t air-conditioned, so the places gets very hot in the summer. There are lots of fans, but they don’t do much good in July and August when the temperature is close to a hundred. Vencil Mares spends all day every day at his seat behind the bar, regardless of the weather. He says hello and goodbye to everybody who walks through the door–except when he’s napping.

Taylor Café is a piece of 1950 Texas stuck in amber. For better or worse, it’s a place where you can experience what it was like to eat in a small town Texas barbecue joint a half a century ago. Back when the barbecue sausage was handmade–the comforts of air conditioning were unknown–and segregation was still the law.

But for the black, Hispanic, and farming familes around Taylor, The Taylor Café is where you go to catch up on what’s happened while you were gone–and to find your old friends and fill others in on your own family history. It’s a place to bring your kids–and to eat some of Vencil’s phenomenal barbecue, of course. For the locals who hang out there everyday, Taylor Café is less of a museum and more of a social institution.
But mainly, Taylor Cafe is Vencil Mare’s place, a 1950s-era small town Texas barbecue joint and cotton pickers’ bar down by the railroad tracks.